By Claribel A. Ortega 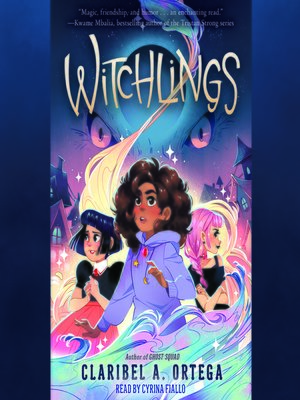 A magical adventure for fans of Amari and the Night Brothers and Nevermoor, about three witchlings who must worktogether to do the impossible if they have any hope of earning their full powers.

Every year, in the magical town of Ravenskill, Witchlings who participate in the Black Moon Ceremony are placed into covens andcome into their powers as full-fledged witches.And twelve-year-old Seven Salazar can't wait to be placed in the most powerful coven with her best friend! But on the night of theceremony, in front of the entire town, Seven isn't placed in one of the five covens. She's a Spare!Spare covens have fewer witches, are less powerful, and are looked down on by everyone. Even worse, when Seven and theother two Spares perform the magic circle to seal their coven and cement themselves as sisters, it doesn't work! They're stuck asWitchlings—and will never be able to perform powerful magic.Seven invokes her only option: the impossible task. The three Spares will be assigned an impossible task: If they work togetherand succeed at it, their coven will be sealed and they'll gain their full powers. If they fail... Well, the last coven to make the attemptended up being turned into toads. Forever.But maybe friendship can be the most powerful magic of all...With action-packed adventure, a coven of quirky witchlings, Claribel A. Ortega's signature humor and girl-power vibes, this middlegrade Latinx witch story is truly a modern classic.