audiobook (Unabridged) ∣ The Unexpected Road to an Unconventional Life 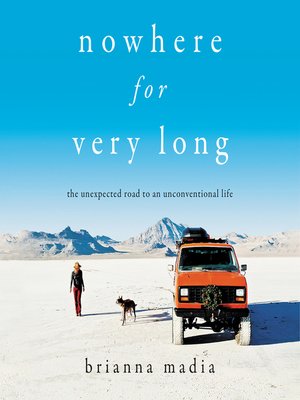 In this beautifully written, vividly detailed memoir, a young woman chronicles her adventures traveling across the deserts of the American West in an orange van named Bertha and reflects on an unconventional approach to life

A woman defined by motion, Brianna Madia bought a beat-up bright orange van, filled it with her two dogs Bucket and Dagwood, and headed into the canyons of Utah with her husband. Nowhere for Very Long is her deeply felt, immaculately told story of exploration—of the world outside and the spirit within.

However, pursuing a life of intention isn't always what it seems. In fact, at times it was downright boring, exhausting, and even desperate—when Bertha overheated and she was forced to pull over on a lonely stretch of South Dakota highway; when the weather was bitterly cold and her water jugs froze beneath her as she slept in the parking lot of her office; when she worried about money, her marriage, and the looming question mark of her future. But Brianna was committed to living a life true to herself, come what may, and that made all the difference.

Nowhere for Very Long is the true story of a woman learning and unlearning, from backroads to breakdowns, from married to solo, and finally, from lost to found to lost again . . . this time, on purpose.