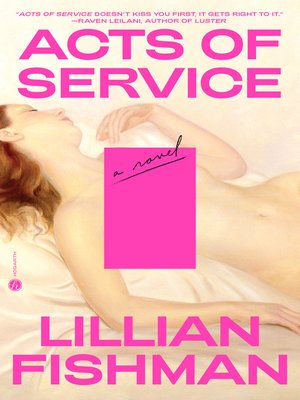 View more libraries...
A “bold and unflinchingly sexy” (Vogue) debut novel about a young woman who follows her desires into a world of pleasure, decadence, and privilege, unraveling everything she thought she knew about sex . . . and herself.

“One of the most entertaining books about sex I’ve ever read . . . The perfect read for fans of Raven Leilani and Ottessa Moshfegh, this is a book that will have people talking.”—BuzzFeed
“A sex masterpiece.”—The Guardian
ONE OF THE BEST BOOKS OF THE YEAR: The New Yorker, The Hollywood Reporter
“Anytime I want, I can forsake this dinner party and jump into real life.”—Eve Babitz
Eve has an adoring girlfriend, an impulsive streak, and a secret fear that she’s wasting her brief youth with just one person. So one evening she posts some nudes online. This is how Eve meets Olivia, and through Olivia the charismatic Nathan. Despite her better instincts, the three soon begin a relationship—one that disturbs Eve as much as it enthralls her.
As each act of their complicated, three-way affair unfolds across a cold and glittering New York, Eve is forced to confront the questions that most consume her: What do we bring to sex? What does it reveal of ourselves, and one another? And how do we reconcile what we want with what we think we should want?
In the way only great fiction can, Acts of Service takes between its teeth the contradictions written all over our ideas of sex and sexuality. At once juicy and intellectually challenging, sacred and profane, Lillian Fishman’s riveting debut is bold, unabashed, and required reading of the most pleasurable sort.