The World and Africa and Color and Democracy (The Oxford W. E. B. Du Bois) 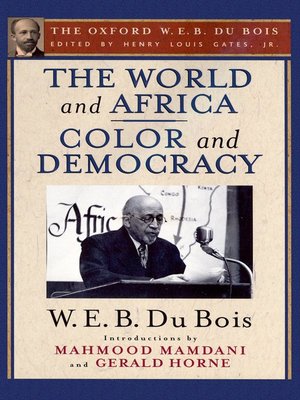 W. E. B. Du Bois was a public intellectual, sociologist, and activist on behalf of the African American community. He profoundly shaped black political culture in the United States through his founding role in the NAACP, as well as internationally through the Pan-African movement. Du Bois's sociological and historical research on African-American communities and culture broke ground in many areas, including the history of the post-Civil War Reconstruction period. Du Bois was also a prolific author of novels, autobiographical accounts, innumerable editorials and journalistic pieces, and several works of history. Collected in one volume for the first time, The World and Africa and Color and Democracy are two of W E. B. Du Bois's most powerful essays on race. He explores how to tell the story of those left out of recorded history, the evils of colonialism worldwide, and Africa's and African's contributions to, and neglect from, world history. More than six decades after W. E. B. Du Bois wrote The World and Africa and Color and Democracy, they remain worthy guides for the twenty-first century. With a series introduction by editor Henry Louis Gates, Jr., and two introductions by top African scholars, this edition is essential for anyone interested in world history.