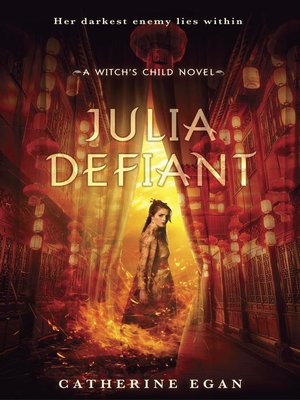 View more libraries...
The heart-pounding follow-up to Julia Vanishes and the second book in the Witch's Child trilogy. Catherine Egan's masterful world-building and fiercely flawed heroine will thrill fans of The Rose Society, Graceling, and Six of Crows
In this compelling and action-packed novel, Julia and her allies travel to the other side of the world in their efforts to thwart Casimir's quest for power. They rescued the baby Theo from his fortress once, but Casimir is relentless. He needs this child. Or rather, he needs the magical power that has been written into the child's very being. And so Julia and a mismatched band of revolutionaries, scholars, and thieves journey to Yongguo, searching out the witch who worked that dark spell. They must find a way to separate the magic from Theo without killing him—a nicety that Casimir won't bother with. Julia is also searching for answers about herself. Her ability to vanish to a place just out of sight has grown—she can now disappear from her world so completely that it's like stepping into another world. A dark and fiery world that that feels disturbingly like hell. Where the creatures seem to recognize her—and count her as one of their own. Caught between a web of ruthless, powerful people, and a world seemingly dredged from her nightmares, Julia must decide not just who but what she really is if she wants to survive.
"Complex and beautifully imagined, Julia’s saga continues to thrill." —Booklist, starred review