The Adventures of Super Diaper Baby 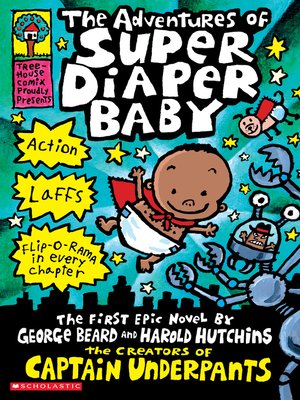 Move over, Dav Pilkey, it's George and Harold's turn to tell the tale of the all-new superhero who's faster than a speeding stroller and more powerful than diaper rash. Make way for Super Diaper Baby!

Oh, no! It looks like George and Harold are in trouble again... As punishment, the boys have to write a 100-page report on "good citizenship," and they have been specifically ordered NOT to make another comic about Captain Underpants. So what do they do? They create an all-new superhero... Super Diaper Baby! Super Diaper Baby's archenemy, Deputy Dangerous, wants to steal his powers and take over the planet. Will the diaper-wearing dynamo defeat the deputy, or is the entire Earth doomed?