When the Rogue Returns 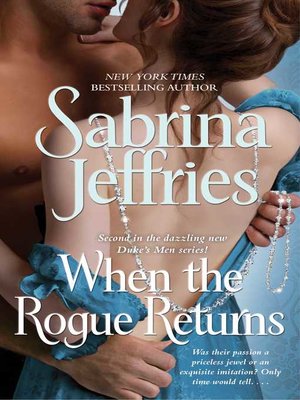 View more libraries...
The second sparkling book in the New York Times bestselling Duke's Men historical romance series, featuring the Duke's cousin and a skilled female jeweler who must unravel a mystery ten years in the making.
They are the Duke's Men, an investigative agency born from family pride and irresistible passion, risking their lives—and sometimes their hearts—as they unravel shocking deceptions and scandalous transgressions!

Victor Cale never imagined that his sweet, shy bride, Isabella, would use her talent for creating exquisite imitation jewels in a criminal way. But there's no denying that Isa's handiwork was used in the brazen heist of the Dutch royal family's diamonds—after she disappeared into the night.

Ten years later, still reeling from her betrayal and enraged that her duplicitous side was so undetectable, Victor is sent to Edinburgh to investigate a wealthy baron's mysterious brideto- be. Simple enough—until the "fiancée" proves to be Isa, masquerading as an alluring young widow.

No longer the meek and mild girl he once knew, the bold woman vehemently asserts that it was Victor who abandoned her after he helped steal the royal diamonds! Piecing together the truth of the past reawakens their volatile passion, which burns hotter than ever. But with a decade of secrets between them, Victor and Isa must trust each other in order to bring the real thieves to justice—without getting burned themselves.