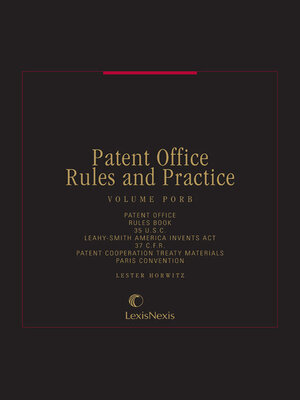 Note: CD-ROM/DVD and other supplementary materials are not included.

The Cornerstone of Any Thriving Patent Law Practice.

Detailed Rule-by-Rule Analysis of the Patent and Trademark Office Rules of Practice.

Included is the text of the rules contained in Title 37 of the Code of Federal Regulations, interpretations of their meanings and explanations of their effect on practice with citations to relevant case law.

Covers Every Area of PTO Practice.

This essential reference provides patent registration applicants with guidelines on the practices and procedures relating to the filing and review of patent applications filed in the Patent and Trademark Office.

This separate desk reference is updated quarterly, and saves extensive research time by centralizing the most recent statutes and regulations affecting patent law practice. This important volume has been expanded to include the Leahy-Smith America Invents Act, passed by Congress and signed into law by President Barack Obama on September 16, 2011.

Practice-Proven Forms for Handling All Transaction With the PTO.

The forms, which are accepted by the PTO, cover nearly every aspect of practice before the PTO and almost every conceivable situation the practitioner might run into, including: transmittal letters for every type of submission to the PTO; forms necessary for filing regular, continuation-in-part, divisional, and international applications; requests for re-issue and re-examination; actions after final rejection and appeals; and responses, amendments, and letters to the PTO.

Available in both print and CD-ROM formats, Patent Office Rules and Practice include: