We Hold These Truths

audiobook (Unabridged) ∣ Understanding the Ideas and Ideals of the Constitution 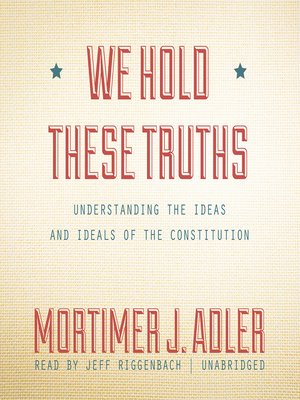 Mortimer Adler devoted a lifetime to studying the great ideas of Western culture and explaining even the most difficult concepts to the average citizen, earning Time magazine's praise as a "philosopher for everyman." In We Hold These Truths, Dr. Adler caps his life's work by illuminating the ideas and ideals that have made the United States of America a truly unique nation in the annals of history.

The ideas Adler examines include those at the core of the Declaration of Independence—human equality, inalienable human rights, civil rights, the pursuit of happiness, and both the consent and dissent of the governed. These are the ideas that form the basis for justice, domestic tranquillity, the common defense, the general welfare, and the blessings of liberty—the ideals that are found in the preamble to the Constitution and which bind us together as a nation and a people.