ebook ∣ My Story of Money and Misogyny at Goldman Sachs 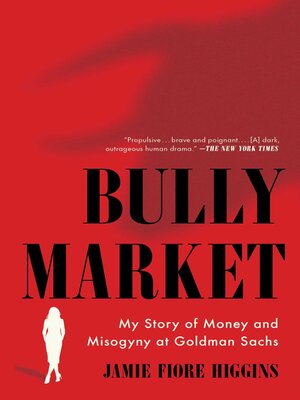 View more libraries...
A "riveting and powerful" (Gretchen Carlson, cofounder of Lift Our Voices) insider's account on Wall Street where greed coupled with misogyny and discrimination enforces a culture of exclusion in the upper echelons of Goldman Sachs.
Jamie Fiore Higgins became one of the few women at the highest ranks of Goldman Sachs. Spurred on by the obligation she felt to her working-class immigrant family, she rose through the ranks and saw it all: out-of-control, lavish parties flowing with never-ending drinks; affairs flouted in the office; rampant drug use; and most pervasively, a discriminatory culture that seemed designed to hold back the few women and people of color employed at the company.

Despite Goldman Sachs having the right talking points and statistics, Fiore Higgins soon realized that these provided a veneer to cover up what she found to be an abusive culture. Her account is one filled with shocking stories of harassment and jaw-dropping tales of exclusionary behavior: when she was told she only got promoted because she is a woman; when her coworkers mooed at her after she pumped for her fourth child, defying the superior who had advised her not to breastfeed; or when a male boss used a racial epithet in front of her, other colleagues, and clients without any repercussions.

Bully Market sounds the alarm on the culture of finance and corporate America, while offering clear, actionable ideas for creating a fairer workplace. Both a revealing, extraordinary look at the industry and a top Wall Streeter's explosive personal story, Bully Market is an essential account of one woman's experience in a flawed system that speaks to the challenge and urgency for change.