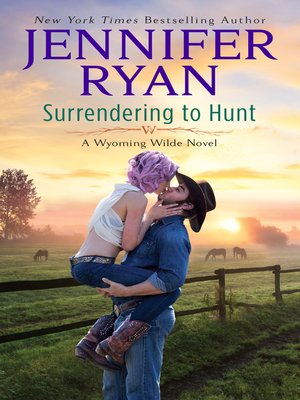 They're tough, tenacious, and sometimes tormented; they're the Wildes of Wyoming, three brothers whose family ties are as strong as their wills.

The last thing lawman Hunt Wilde ever dreamed he'd do was fall hard for a purple-haired troublemaker like Cyn Wilson. While Hunt believes in law and order, Cyn lives life fast and loose—with fast cars and wild nights. But when Cyn's sister disappears, she surprisingly turns to him for help. Never let it be said that a Wilde man turned down a woman in distress—and on a mission.

It takes a lot for Cyn to swallow her pride and ask Hunt for anything. The man never gives her a break and is always staring at her with those perceptive eyes. But beneath Cyn's tough exterior beats a heart as wide and beautiful as Wyoming itself—and soon she finds herself surrendering to the overpowering attraction simmering between them and partnering with him in the search for her missing sister.

She won't rest until she learns the truth, even if that means putting herself in harm's way. And when Hunt discovers how much danger Cyn is in because of him, he's even more determined to take down the man who would take her out of Hunt's life—forever.