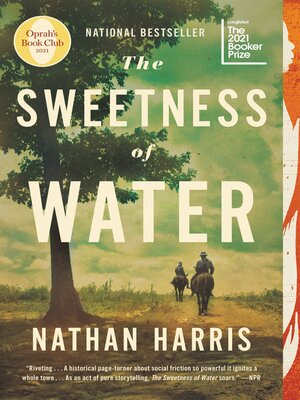 View more libraries...
An Instant New York Times bestseller / An Oprah’s Book Club Pick
In the spirit of The Known World and The Underground Railroad, an award-winning “miraculous debut” (Washington Post) about the unlikely bond between two freedmen who are brothers and the Georgia farmer whose alliance will alter their lives, and his, forever
In the waning days of the Civil War, brothers Prentiss and Landry—freed by the Emancipation Proclamation—seek refuge on the homestead of George Walker and his wife, Isabelle. The Walkers, wracked by the loss of their only son to the war, hire the brothers to work their farm, hoping through an unexpected friendship to stanch their grief. Prentiss and Landry, meanwhile, plan to save money for the journey north and a chance to reunite with their mother, who was sold away when they were boys.
Parallel to their story runs a forbidden romance between two Confederate soldiers. The young men, recently returned from the war to the town of Old Ox, hold their trysts in the woods. But when their secret is discovered, the resulting chaos, including a murder, unleashes convulsive repercussions on the entire community. In the aftermath of so much turmoil, it is Isabelle who emerges as an unlikely leader, proffering a healing vision for the land and for the newly free citizens of Old Ox.
With candor and sympathy, debut novelist Nathan Harris creates an unforgettable cast of characters, depicting Georgia in the violent crucible of Reconstruction. Equal parts beauty and terror, as gripping as it is moving, The Sweetness of Water is an epic whose grandeur locates humanity and love amid the most harrowing circumstances.
One of President Obama's Favorite Books of 2021
Winner of the Ernest J. Gaines Award for Literary Excellence
Winner of the Willie Morris Award for Southern Fiction
Longlisted for the Man Booker Prize
Shortlisted for the Dylan Thomas Prize
Shortlisted for the VCU Cabell First Novelist Award
Longlisted for the 2022 Carnegie Medal for Excellence
Longlisted for the Center for Fiction First Novel Prize
Longlisted for the Crook’s Corner Book Prize
A Best Book of the Year: Oprah Daily, NPR, Washington Post, Time, Boston Globe, Smithsonian, Chicago Public Library, BookBrowse, and the Oregonian
A New York Times Book Review Editors' Choice
A July 2021 Indie Next Pick