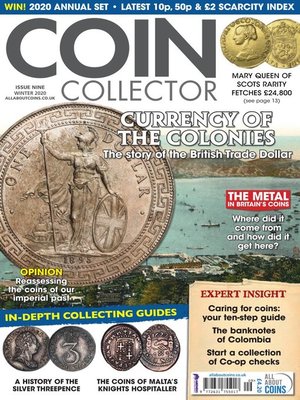 Coin Collector gives you all the information, news, expert advice, market insight and inspiration you need to build your coin collection and get the most from your hobby. Every issue features in-depth collecting guides giving you the lowdown on coins from a wide range of periods and location, from Viking and Roman coins to the latest coins issued by mints around the world. Each issue includes the unique and popular ‘British Numismatist’ section, bringing you the latest discoveries, exhibitions, theories and literature from the academic world of numismatics. Written by authors, curators and learned experts, the pages provide an academic yet still accessible take on the hobby.

Writing in this issue

PRODUCTION OF 2p AND £2 COINS TO STOP

• THE LATEST COIN SALES FROM AROUND THE WORLD

IS THIS THE GREAT COIN DEPRESSION?

• Has our ‘annus horribilis’ left the world of coin collecting in dire straits? Not even close, writes ‘Coinosseur’ Sebastian Wieschowski, as he charts the encouraging response to the Covid19 virus across Europe

VIEW FROM THE USA BIDDING AT AUCTION

• Despite the daily distractions of the news, rare coins are still trading hands, writes US coin expert Jeff Garrett, as he assures us the rare coin market is still alive. So now’s the perfect time to start finding out more about bidding for coins at auction

The story of THE BRITISH TRADE DOLLAR

• In this major coin guide, Dr Kevin Clancy, Director of The Royal Mint Museum, provides an in-depth analysis of the British Trade Dollar, a short-lived international currency that received a mixed response and is now an intriguing reminder of the British Empire

• Our hobby offers so much, writes Matt Hill. Each piece sheds light on subjects such as art, geography, politics, literature, and history. Take any coin in your collection and there’s very likely an intriguing story to be told. We’re not simply ticking pieces off a ‘wants list’ we’re preserving and re-telling our past

CARING FOR YOUR COINS

• We all put a great deal of time and money into our collections, so it makes sense to give just as much care and attention into storing and looking after it. Here’s ten tips for collecting success.

The Knights OF MALTA

• Inspired by the numerous coins issued over the centuries, coin expert Tony Holmes charts the eventful history of Malta’s Knights Hospitaller, who ruled the Mediterranean country for many years

• We recently spoke to Andreina Nye, the Digital Marketing Consultant at Pobjoy Mint and asked her about the Mint’s brand new website and how the company has fared during the challenging year

• In our regular spotlight on medals, James Kemp of the Orders & Medals Research Society, describes the Afghanistan Medal for the Second Afghan War, an attractive medal awarded for the campaign from November 1878 to September 1880

THE METAL IN BRITAIN’S COINS WHERE DID IT COME FROM & HOW DID IT GET HERE?

• When we’re studying classic British coins, depicting the stoic portraits of monarchs from our past, we can often overlook the origins of the materials used to make these symbols of power. In this special feature, author Graham Birch provides a new perspective on the nation’s coinage, explaining how many of our coins were made with material from all corners of the world