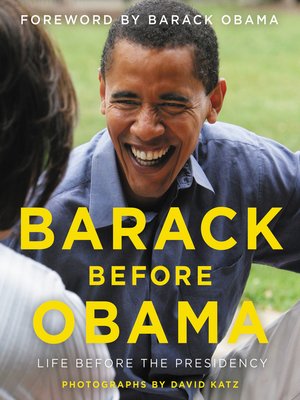 A People Pick of the Week

One of USA Today's 5 Books Not to Miss

One of Forbes' 5 Books to Read in December

A personal, intimate photographic celebration of President Barack Obama, featuring over 200 rare and never-before seen images from the years prior to his presidency, from photographer, friend, and former aide David Katz

In 2004, David Katz worked alongside then Senate-hopeful Barack Obama as a photographer and personal aide. He spent approximately six days a week alongside the future president as Obama campaigned across downstate Illinois, and the two developed a close, professional, and personal relationship. What began as a long-shot Senate run culminated with the election of America's first African American president in 2008, which Katz also photographed.

During this time, David was never without his camera, capturing quotidian scenes from the life of a man who would soon become known the world over: a dad playing with his small daughters; a young unknown politician walking the streets of New York by himself with no one noticing; a devoted husband lovingly making faces at his wife in an elevator. In 2004, after seeing the unique and touching photographs David had amassed, Annie Leibovitz gave him some advice: "Don't release these photos of Obama for at least fifteen years. They need time to age."

Now, fifteen years later, Barack Before Obama is the treasury of these photographs. Pulled from an archive of more than ninety thousand images, every photograph in this volume is like nothing that has been seen before: the ease in which David captures the spirit and essence of one of our most beloved first families is unparalleled, and it is in this affectionate familiarity that his photographs sing. Warm, engaging captions tell the stories behind the photos—the surprise meeting with Nelson Mandela, the back room conversation before the rally, the emotion after sending one of the Obamas' daughters off to school—bringing readers closer than ever to the spirit and motivation behind the extraordinary man who became our forty-fourth president.

Barack Before Obama is a unique collection of images illustrating the making of an American icon. A moving document of an historic moment, it's the perfect gift for all those who want to remember it.