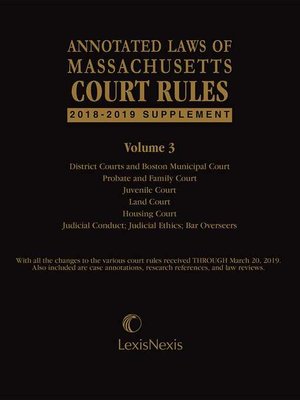 Massachusetts Court Rules Annotated is a three-volume set issued annually and supplemented mid-year. The first volume contains the Massachusetts Rules of Civil and the Rules of Criminal Procedure with court forms. The second volume contains the Massachusetts Rules of Appellate Procedure, the evidence guide, and the rules of the Supreme Judicial Court, Appeals Court, and the various trial courts, along with the standing orders and forms issued by each. The third volume features the rules, forms, and standing orders of the various District Courts & Boston Municipal Court, Probate and Family Court, Juvenile Court, Land Court, Housing Court, as well as rules governing judicial conduct, judicial ethics and Board of Bar Overseers.

Each volume is fully annotated and includes references to: