The Reaper Rescues the Genie 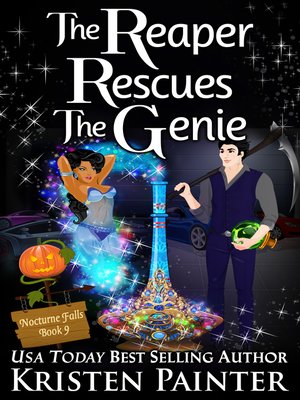 Welcome to Nocturne Falls, the town that celebrates Halloween 365 days a year. The tourists think it's all a show: the vampires, the werewolves, the witches, the occasional gargoyle flying through the sky. But the supernaturals populating the town know better.

Living in Nocturne Falls means being yourself. Fangs, fur, and all.

Death is what grim reaper Lucien Dupree knows best. Or rather, he did until his reaping powers became tragically unreliable. Now he's living in a self-imposed exile to keep humanity safe. Sure, it's a lonely existence, but it's the best thing for everyone. Except him.

Retired genie, Imari Zephara, has found her happy place in Nocturne Falls. Well, as happy as she can be considering the alternative returning home would bring her. Then a dark force rears its ugly head and throws her life into turmoil. Suddenly the only way to save herself is to join forces with death, who turns out to be a pretty amazing guy.

But Lucien's defective powers might not be enough to overcome centuries of jinn tradition, meaning Imari's life would no longer be her own. All he wants is to give her the chance to choose her own future. Hopefully, one that includes him. What more could a guy a wish for?