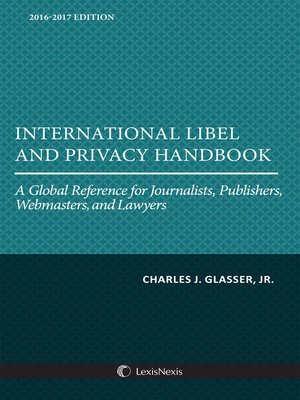 Especially now, in an age of instant global access through digital media, it is vitally important that journalists, authors and publishers, as well as the lawyers who serve them, be fully up on the laws governing the media, worldwide. Enter International Libel and Privacy Handbook.

The ultimate resource for media content providers and purveyors, wherever they are based, this fully updated and expanded edition of the critically acclaimed handbook gives you instant access to relevant libel and privacy laws and important legal rulings in Europe, Asia, the Middle East and the Americas. Written by veteran journalist and First Amendment lawyer, Charles J. Glasser, Esq., and based on extensive surveys of lawyers around the world—all of them experts in their nation's or region's media and privacy laws—International Libel and Privacy Handbook features: