ebook ∣ The Descent, the Suicide Attempt, and the Return to Life!

By Richard A. Heckler, Phd. 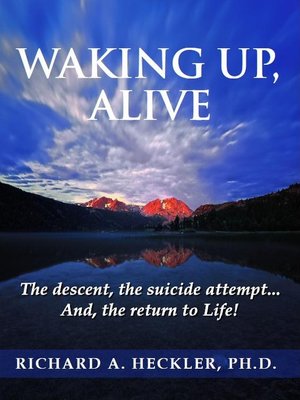 "Turning toward suicide can be one of the most stark expressions of human suffering that exists," writes Tara Brach. "In this groundbreaking book we are guided into the hearts and minds of those who have descended into this hell realm, and emerged, able to re-choose life and communicate about the journey. Richard Heckler's brilliant and sensitive interviews give us understanding and hope."

"It's hard to imagine a hopeful or inspiring book on suicide," writes the San Francisco Chronicle, "until you begin reading the astonishing WAKING UP, ALIVE. True, the words around these 50 people before they tried to kill themselves were often ones like 'acutely depressed,' 'isolated,' 'in unbearable pain' and 'suffering in quiet desperation,' but the failed act itself appears to have performed a quiet miracle, forcing their lives into a new direction."

"EXTRAORDINARY," writes the Los Angeles Daily News, "FASCINATING. Worthwhile reading both as a kind of survival epic and for the lessons it affords us all coping with the trials of daily life."

"An invigorating testament to the resilience of the human spirit," writes Wayne Muller, "Richard Heckler skillfully guides us through the most unimaginable sorrow and despair, and allows us to taste the triumphant harvest of healing and grace."