audiobook (Abridged) ∣ The Last of Mr. Norris and Goodbye to Berlin 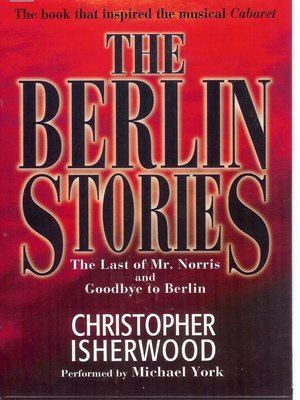 The Last of Mr. Norris and Goodbye to Berlin make up this 1946 reissue of Christopher Isherwood's finest novels. Both are set in 1930s Berlin during the rise of Hitler. Based in part on the author's experience as an English tutor in Germany, each one is a theatric mélange of fact and fiction, a rousing and provocative intersection of history and fantasy. The Last of Mr. Norris depicts the debauchery of an aging criminal caught in the struggle between the Nazis and the Communists. Goodbye to Berlin, an account of young man who explores his sexual identity in the city's nightclubs, is narrated by Isherwood himself and is considered among the most significant political novels of the twentieth century. Together the stories detail the tenuous existence of marginal people who are unaware of the political horrors to come.