The Hands of War

ebook ∣ A Tale of Endurance and Hope, from a Survivor of the Holocaust 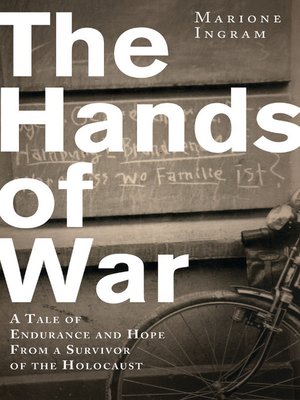 Marione Ingram grew up in Hamburg, Germany, in the late 1930s and early 1940s. She was German. She was Jewish. She was a survivor. This is her story.

As a young girl, Marione was aware that people of the Jewish faith were regarded as outsiders, the supposed root of Germany's many problems. She grew up in an apartment building where neighbors were more than happy to report Jews to the Gestapo. Marione's mother attempted suicide after receiving a deportation notice—Marione revived her, but then the bombs started to fall, as the Allies leveled the city in eight straight days of bombings. Somehow Marione and her mother and sister survived the devastating firestorms—more than 40,000 perished, and almost the same numbered were wounded.

Marione and her family miraculously escaped and sought shelter with a contact in the countryside who grudgingly agreed to house them in a shed for more than a year. With the war drawing to a close, they went west, back to Hamburg. There they encountered Allied troops, who reinstalled the local government (made up of ex-Nazis) in order to keep order in the country. Life took on the air of what it used to be. Jews were still second-class citizens.

Marione eventually took shelter at a children's home in a mansion once owned by wealthy Jewish bankers. There she met Uri, a troubled orphan and another one of the "Children of Blankenese." Uri's story, a bleak tale of life in the concentration camps, explores a different side of the Nazi terror in Germany.

In this stirring account of World War II through the eyes of a child, the author's eloquent narrative elicits compassion from readers. Marione Ingram grew up in Hamburg, Germany, in the late 1930s and early 1940s. She was German. She was Jewish. She was a survivor. This is her story.