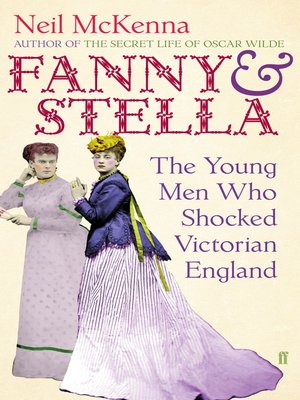 28th April 1870. Fanny and Stella, the flamboyantly dressed Miss Fanny Park and Miss Stella Boulton, are causing a stir in the Strand Theatre. All eyes are riveted upon their lascivious oglings of the gentlemen in the stalls. Moments later they are led away by the police. What followed was a scandal that shocked and titillated Victorian England in equal measure.
It turned out that the alluring Miss Fanny Park and Miss Stella Boulton were no ordinary young women. Far from it. In fact, 'Boulton and Park' were young men who liked to dress as women. When the Metropolitan Police launched a secret campaign to bring about their downfall, they were arrested and subjected to a sensational show trial in Westminster Hall.
As the trial of 'the Young Men in Women's Clothes' unfolded, Fanny and Stella's extraordinary lives as wives and daughters, actresses and whores were revealed to an incredulous public.
With a cast of peers, politicians and prostitutes, drag queens, doctors and detectives, Fanny and Stella is a Victorian peepshow, exposing the startling underbelly of nineteenth-century London. By turns tragic and comic, meticulously researched and dazzlingly written, Fanny and Stella is an enthralling tour-de-force.