ebook ∣ Behind the Glass at the Florida Studio 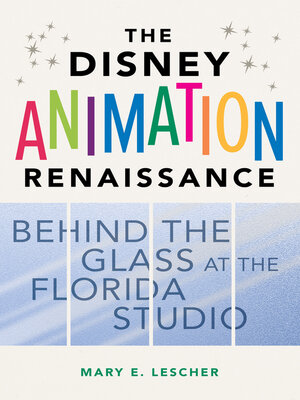 Walt Disney Feature Animation Florida opened in Orlando at the dawn of the Disney Renaissance. As a member of the crew, Mary E. Lescher witnessed the small studio's rise and fall during a transformative era in company and movie history. Her in-depth interviews with fellow artists, administrators, and support personnel reveal the human dimension of a technological revolution: the dramatic shift from hand-drawn cel animation to the digital format that eclipsed it in less than a decade. She also traces the Florida Studio's parallel existence as a part of The Magic of Disney Animation, a living theme park attraction where Lescher and her colleagues worked in full view of Walt Disney World guests eager to experience the magic of the company's legendary animation process.

A ground-level look at the entertainment giant, The Disney Animation Renaissance profiles the people and purpose behind a little-known studio during a historic era.

"Lescher's admiring narrative, which incorporates her firsthand experience and interviews with fellow artists, illuminates the talent of Disney animators. Readers who cherish all things House of Mouse will find much to appreciate." —Publishers Weekly


"Adds significantly to the canon of Disney commentary. Mary Lescher was part of an interesting experiment—the creation of a working animation studio that doubled as a theme park attraction—and she was there at a crucial point in the history of animation, when the industry was on the brink of a technological revolution thanks to the development of 3-D digital tools. She chronicles that experiment, as well as the various changes swirling around animation, in an effective and even fond manner, letting us see behind the scenes."—J. P. Telotte, author of The Mouse Machine: Disney and Technology
|

Mary E. Lescher (1957-2019) was an animator, art historian, and museum curator. She worked as a cameraperson and scene planner for Walt Disney Feature Animation and DisneyToon Studios from 1989 to 2006. The exhibits she curated include Collectibility: Art and Commodity from the Disney Renaissance and The Florida Studio: Disney Art and Artifact.