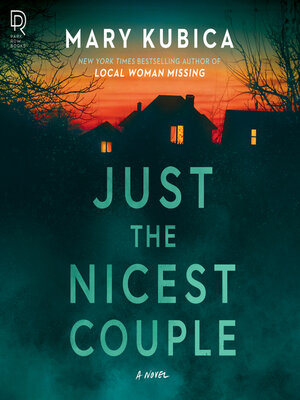 View more libraries...
A NEW YORK TIMES BESTSELLER
"Grabs you on the first page and doesn't let go until you reach the end." —Laura Dave, New York Times bestselling author of The Last Thing He Told Me
A husband's disappearance links two couples in this twisty thriller from master of suspense Mary Kubica
Jake Hayes is missing. This much is certain. At first, his wife, Nina, thinks he is blowing off steam at a friend's house after their heated fight the night before. But then a day goes by. Two days. Five. And Jake is still nowhere to be found.
Lily Scott, Nina's friend and coworker, thinks she may have been the last to see Jake before he went missing. After Lily confesses everything to her husband, Christian, the two decide that nobody can find out what happened leading up to Jake's disappearance, especially not Nina. But Nina is out there looking for her husband, and she won't stop until the truth is discovered.
"Rich with detail and a mounting, almost suffocating sense of dread, Just the Nicest Couple is a dark and twisted exploration of loyalty, family, and how far we'll go to protect the ones we love." —Andrea Bartz, New York Times bestselling author of We Were Never Here