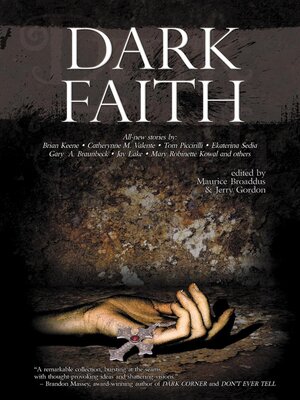 Some of the genre's top authors and most promising newcomers whisper horror tales that creep through the mists at night to rattle your soul. Step beyond salvation and damnation in this intense horror and dark fantasy anthology containing thirty stories and poems that reveal the darkness beneath belief. Place your faith in that darkness; it's always there, just beyond the light.

Experience the spiritual side of the zombie apocalypse in "The Days of Flaming Motorcycles" and transcend both hell and nirvana in "Zen and the Art of Gordon Dratch's Damnation." Look into "The Mad Eyes of the Heron King" to find the beautiful brutality written in the moment of epiphany or "Go and Tell it On the Mountain," where Jesus Christ awaits your last plea to enter heaven—if there is a heaven to enter when all is said and done.

Contains the following stories and poems:

"The Story of Belief-Non" by Linda D. Addison (poem)
"Ghosts of New York" by Jennifer Pelland
"I Sing a New Psalm" by Brian Keene
"He Who Would Not Bow" by Wrath James White
"Zen and the Art of Gordon Dratch's Damnation" by Douglas F. Warrick
"Go and Tell It on the Mountain" by Kyle S. Johnson
"Different from Other Nights" by Eliyanna Kaiser
"Lilith" by Rain Graves (poem)
"The Last Words of Dutch Schultz Jesus Christ" by Nick Mamatas
"To the Jerusalem Crater" by Lavie Tidhar
"Chimeras & Grotesqueries" by Matt Cardin
"You Dream" by Ekaterina Sedia
"Mother Urban's Booke of Dayes" by Jay Lake
"The Mad Eyes of the Heron King" by Richard Dansky
"Paint Box, Puzzle Box" by D.T. Friedman
"A Loss For Words" by J. C. Hay
"Scrawl" by Tom Piccirilli
"C{her}ry Carvings" by Jennifer Baumgartner (poem)
"Good Enough" by Kelli Dunlap
"First Communions" by Geoffrey Girard
"The God of Last Moments" by Alethea Kontis
"Ring Road" by Mary Robinette Kowal
"The Unremembered" by Chesya Burke
"Desperata" by Lon Prater (poem)
"The Choir" by Lucien Soulban
"The Days of Flaming Motorcycles" by Catherynne M. Valente
"Miz Ruthie Pays Her Respects" by Lucy A. Snyder
"Paranoia" by Kurt Dinan (poem)
"Hush" by Kelly Barnhill
"Sandboys" by Richard Wright
"For My Next Trick, I'll Need a Volunteer" by Gary A. Braunbeck