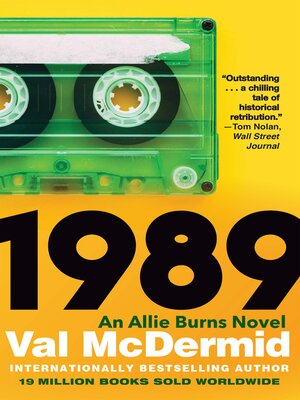 View more libraries...
In the new installment to her historical crime series that began with 1979, internationally bestselling author Val McDermid delivers a propulsive new thriller that finds journalist Allie Burns has become an editor, and as the Cold War and AIDS crisis deliver a nonstop tide of news, most of it bad, a story falls into her lap. And then there's a murder.

Hailed as Britain's Queen of Crime, Val McDermid's award-winning, internationally bestselling novels have captivated readers for more than thirty years. In her Allie Burns series, she returns to the past—both ours and in some ways her own—with the story of a female journalist whose stories lead her into world of corruption, terror, and murder.
It's 1989 and Allie Burns is back. Older and maybe wiser, she's running the northern news operation of the Sunday Globe, chafing at losing her role in investigative journalism and at the descent into the gutter of the UK tabloid media. But there's plenty to keep her occupied. The year begins with the memorial service for the victims of the bombing of Pan Am Flight 103 over Lockerbie, Scotland, but Allie has barely filed her copy when she stumbles over a story about HIV/AIDS that will shock her into a major change of direction. The world of newspapers is undergoing a revolution, there's skullduggery in the medical research labs and there are seismic rumblings behind the Iron Curtain. When murder is added to this potent mix, Allie is forced to question all her old certainties.
Readers are having a great time time-traveling with Val, and 1989 is a seamless, riveting novel that brings us once again face to face with how very much past is prologue, and how history's sins stay with us.