ebook ∣ 12 Conversations to Keep You Laughing, Loving, and Learning with Your Partner 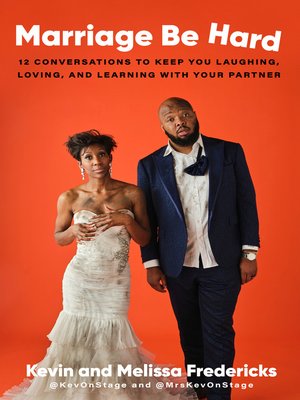 View more libraries...
NEW YORK TIMES BESTSELLER • Discover the keys to upholding your vows while staying sane in this hilariously candid guide to relationships, from the husband-and-wife team of comedian Kevin Fredericks and influencer Melissa Fredericks
FINALIST FOR THE NAACP IMAGE AWARD • “Kev and Melissa are not afraid to tell the truth!”—Tabitha Brown, New York Times bestselling author of Feeding the Soul
Growing up, Kevin and Melissa Fredericks were taught endless rules around dating, sex, and marriage, but not a lot about what actually makes a relationship work. When they first got married, they felt alone—like every other couple had perfect chemistry while the two of them struggled. There were conversations that they didn’t know they needed to have, fears that affected how they related to each other, and seasons of change that put their marriage to the test.
Part of their story reads like a Christian fairytale: high school sweethearts, married in college, never sowed any wild oats, with two sons and a thriving marriage. But there’s another side of their story: the night Melissa kicked Kevin out of her car after years of communication problems, the time early in their marriage when Kevin bordered on an emotional affair, the way they’ve used social media and podcasts to conduct a no-holds-barred conversation about forbidden topics like jealousy, divorce, and how to be Christian and sex positive. (Because, as Kevin writes, “Your hormones don’t care about your religious beliefs. Your hormones want you to subscribe to OnlyFans.”)
In Marriage Be Hard, the authors provide a hilarious and fresh master class on what it takes to build and maintain a lasting relationship. Drawing on interviews with experts and nearly two decades of marriage, they argue that
• Compatibility is overrated.
• Communication is about way more than simply talking.
• Seeing divorce as an option can actually help your marriage.
• There’s such a thing as healthy jealousy.
Real marriage is not automatic. It ain’t no Tesla on the open road. Sometimes it’s a stick shift on a hill in the rain with no windshield wipers. But if you get comfortable visiting—and revisiting—the topics that matter, it can transform your bond with your partner and the life you’re building together.
Written for those tired of unrealistic relationship books—and for anyone wondering if they’re the only ones breaking all the rules—Marriage Be Hard is a breath of fresh air and the manual you wish existed after you said “I do.”