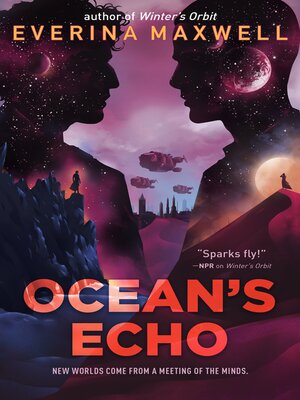 Ocean's Echo is a stand-alone space adventure about a bond that will change the fate of worlds, set in the same universe as Everina Maxwell's hit debut, Winter's Orbit.

"I inhaled this one like I needed it to live." —New York Times Book Review
Rich socialite, inveterate flirt, and walking disaster Tennalhin Halkana can read minds. Tennal, like all neuromodified "readers," is a security threat on his own. But when controlled, readers are a rare asset. Not only can they read minds, but they can navigate chaotic space, the maelstroms surrounding the gateway to the wider universe.
Conscripted into the military under dubious circumstances, Tennal is placed into the care of Lieutenant Surit Yeni, a duty-bound soldier, principled leader, and the son of a notorious traitor general. Whereas Tennal can read minds, Surit can influence them. Like all other neuromodified "architects," he can impose his will onto others, and he's under orders to control Tennal by merging their minds.
Surit accepted a suspicious promotion-track request out of desperation, but he refuses to go through with his illegal orders to sync and control an unconsenting Tennal. So they lie: They fake a sync bond and plan Tennal's escape.
Their best chance arrives with a salvage-retrieval mission into chaotic space—to the very neuromodifcation lab that Surit's traitor mother destroyed twenty years ago. And among the rubble is a treasure both terrible and unimaginably powerful, one that upends a decades-old power struggle, and begins a war.
Tennal and Surit can no longer abandon their unit or their world. The only way to avoid life under full military control is to complete the very sync they've been faking.
Can two unwilling weapons of war bring about peace?
At the Publisher's request, this title is being sold without Digital Rights Management Software (DRM) applied.