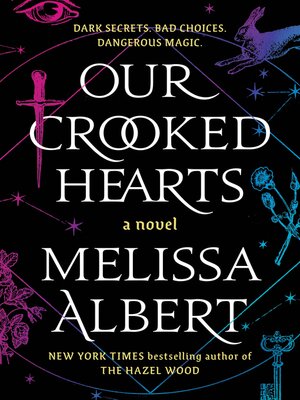 NATIONAL BESTSELLER * #1 INDIE NEXT PICK * 6 STARRED REVIEWS
Secrets. Lies. Bad choices. Dangerous magic. . . . From NEW YORK TIMES bestselling author Melissa Albert comes OUR CROOKED HEARTS, a contemporary fantasy "so precise and enthralling that the only explanation is that Albert herself is a witch" (Booklist, starred review)

On the way home from a party, seventeen-year-old Ivy and her soon-to-be ex nearly run over a nude young woman standing in the middle of a tree-lined road. It's only the first in a string of increasingly eerie events and offerings: a dead rabbit in the driveway, a bizarre concoction buried by her mother in the backyard, a box of childhood keepsakes hidden in her parents' closet safe. Most unsettling of all, corroded recollections of Ivy and her enigmatic mother's past resurface, with the help of the boy next door.
What if there's more to Ivy's mother than meets the eye? And what if the supernatural forces she messed with during her own teen years have come back to haunt them both? Ivy must grapple with these questions and more if she's going to escape the darkness closing in.
Straddling Ivy's contemporary suburban town and her mother's magic-drenched 1990s Chicago, this bewitching and propulsive story rockets towards a conclusion guaranteed to keep readers up all night.