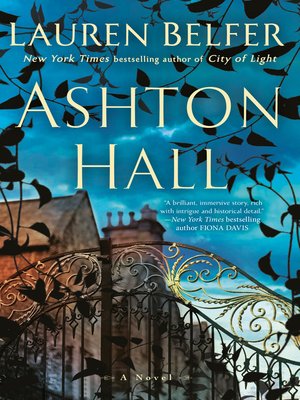 View more libraries...
An American woman and her son stumble upon the dark history of a rambling English manor house in this “masterful, riveting, and atmospheric” (Alka Joshi, author of The Henna Artist) novel from New York Times bestselling author Lauren Belfer.

“With vibrant prose, Lauren Belfer shepherds us through a centuries-old mystery and into a modern-day introspection on motherhood, marriage, and love.”—Georgia Hunter, New York Times bestselling author of We Were the Lucky Ones

When a close relative falls ill, Hannah Larson and her young son, Nicky, join him for the summer at Ashton Hall, a historic manor house outside Cambridge, England. A frustrated academic whose ambitions have been subsumed by the challenges of raising her beloved child, Hannah longs to escape her life in New York City, where her marriage has been upended by a recently discovered and devastating betrayal.
Soon after their arrival, ever-curious Nicky finds the skeletal remains of a woman walled into a forgotten part of the manor, and Hannah is pulled into an all-consuming quest for answers, Nicky close by her side. Working from clues in centuries-old ledgers showing what the woman’s household spent on everything from music to medicine; lists of books checked out of the library; and the troubling personal papers of the long-departed family, Hannah begins to recreate the Ashton Hall of the Elizabethan era in all its color and conflict. As the multilayered secrets of her own life begin to unravel, Hannah comes to realize that Ashton Hall’s women before her had lives not so different from her own, and she confronts what mothers throughout history have had to do to secure their independence and protect their children.
“Infused with the brooding, gothic atmosphere of Jane Eyre or Rebecca” (Melanie Benjamin, author of The Children’s Blizzard) and rich with female passion, strength, and ferocity across the ages, Ashton Hall is a novel that reveals how the most profound hauntings are within ourselves.