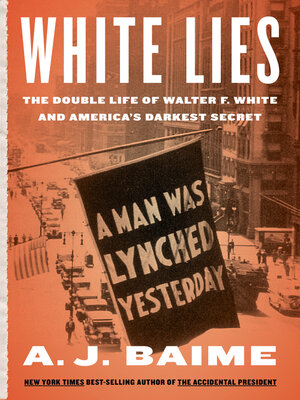 An "electrifying" biography of Walter White, a little-remembered Black civil rights leader who passed for white in order to investigate racist murders, help put the NAACP on the map, and change the racial identity of America forever (Chicago Review of Books).

Walter F. White led two lives: one as a leader of the Harlem Renaissance and the NAACP in the early twentieth century; the other as a white newspaperman who covered lynching crimes in the Deep South at the blazing height of racial violence. Born mixed race and with very fair skin and straight hair, White was able to "pass" for white. He leveraged this ambiguity as a reporter, bringing to light the darkest crimes in America and helping to plant the seeds of the civil rights movement.

White's risky career led him to lead a double life. He was simultaneously a second-class citizen subject to Jim Crow laws at home and a widely respected professional with full access to the white world at work. His life was fraught with internal and external conflict—much like the story of race in America. Starting out as an obscure activist, White ultimately became Black America's most prominent leader, during his time. A character study of White's life and career with all these complexities has never been rendered, until now.

By the award-winning, New York Times bestselling author of The Accidental President, Dewey Defeats Truman, and The Arsenal of Democracy, White Lies uncovers the life of a civil rights leader unlike any other.