The Lords of the Realm 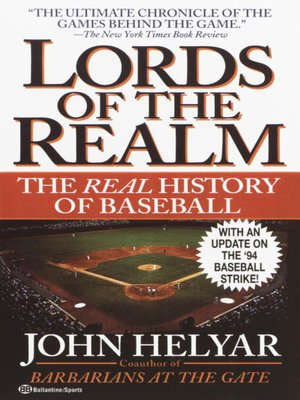 Baseball has always inspired rhapsodic elegies on the glory of man and golden memories of wonderful times. But what you see on the field is only half the game.

In this fascinating, colorful chronicle—based on hundreds of interviews and years of research and digging—John Helyar brings to vivid life the extraordinary people and dramatic events that shaped America's favorite pastime, from the dead-ball days at the turn of the century through the great strike of 1994. Witness zealous Judge Landis banish eight players, including Shoeless Joe Jackson, after the infamous "Black Sox" scandal; the flamboyant A's owner Charlie Finley wheel and deal his star players, Vida Blue and Rollie Fingers, like a deck of cards; the hysterical bidding war of coveted free agent Catfish Hunter; the chain-smoking romantic, A. Bartlett Giamatti, locking horns with Pete Rose during his gambling days of summer; and much more.

Praise for The Lords of the Realm

"A must-read for baseball fans . . . reads like a suspense novel."—Kirkus Reviews

"Refreshingly hard-headed . . . the only book you'll need to read on the subject."—Newsday