ebook ∣ The True Story of James Herman Banning, the First African American Pilot to Fly Across the United States 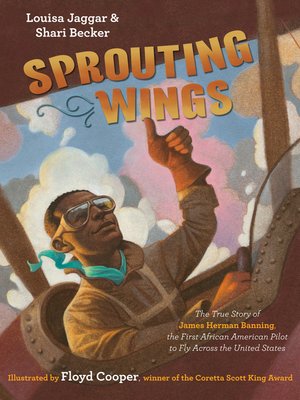 View more libraries...
The inspirational and true story of James Herman Banning, the first African American pilot to fly across the country, comes to life in this picture book biography perfect for fans of Hidden Figures and Little Leaders. Includes art from a Coretta Scott King award-winning illustrator.
James Herman Banning always dreamed of touching the sky. But how could a farm boy from Oklahoma find a plane? And how would he learn to fly it? None of the other pilots looked like him. Despite the challenges and prejudices that stood in his way, James knew he belonged above the clouds.
In a journey that would span 3,300 miles, take twenty-one days, and inspire a nation, James Herman Banning proved that you can't put barriers on dreams. Louisa Jaggar incorporates over seven years of research, including Banning's own writings and an interview with the aviator's great-nephew. She teams up with cowriter Shari Becker and award-winning illustrator Floyd Cooper to capture Banning's historic flight across the United States.

"A pathos-filled picture book that celebrates the life of a figure in American history who hasn't been featured often." -School Library Journal, Starred Review