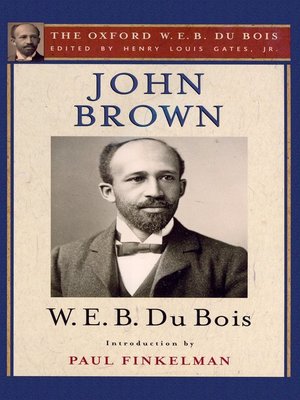 W. E. B. Du Bois was a public intellectual, sociologist, and activist on behalf of the African American community. He profoundly shaped black political culture in the United States through his founding role in the NAACP, as well as internationally through the Pan-African movement. Du Bois's sociological and historical research on African-American communities and culture broke ground in many areas, including the history of the post-Civil War Reconstruction period. Du Bois was also a prolific author of novels, autobiographical accounts, innumerable editorials and journalistic pieces, and several works of history. John Brown is W. E. B. Du Bois's groundbreaking political biography that paved the way for his transition from academia to a lifelong career in social activism. This biography is unlike Du Bois's earlier work; it is intended as a work of consciousness-raising on the politics of race. Less important are the historical events of John Brown's life than the political revelations found within the pages of this biography. At the time that he wrote it in 1909, Du Bois had begun his transformation into the most influential civil rights leader of his time. With a series introduction by editor Henry Louis Gates, Jr., and an introduction by Paul Finkelman, this edition is essential for anyone interested in African American history.