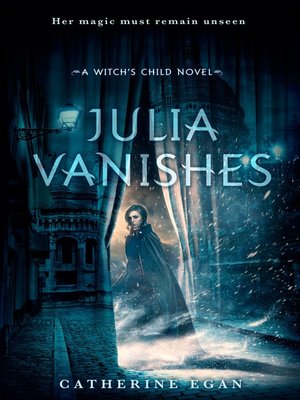 View more libraries...
"An exciting novel with magic and serial killers.... One of the hottest books coming out."—Hypable.com

Fans of Marie Lu, Leigh Bardugo, and Kristin Cashore will be captivated by this stunning first book in a must-have new fantasy trilogy about a spy who can vanish at will and who discovers that monsters, mystery, and magic are also lurking—just out of sight.

Julia has the unusual ability to be . . . unseen. Not invisible, exactly. Just beyond most people's senses.

It's a dangerous trait in a city that has banned all forms of magic and drowns witches in public Cleansings. But it's a useful trait for a thief and a spy. And Julia has learned—crime pays.

She's being paid very well indeed to infiltrate the grand house of Mrs. Och and report back on the odd characters who live there and the suspicious dealings that take place behind locked doors.

But what Julia discovers shakes her to the core. She certainly never imagined that the traitor in the house would turn out to be . . . her.

Murder, thievery, witchcraft, betrayal—Catherine Egan builds a dangerous world where her fierce and flawed heroine finds that even a girl who can vanish can't walk away from her own worst deeds.