Bacca and the Riddle of the Diamond Dragon 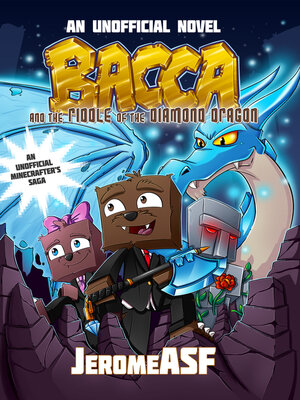 View more libraries...
A star Minecrafter presents an action-packed novel starring his famous furry creation!
Bacca has it all. The most celebrated (and furry) star in the Overworld, he's the person others look to for help building their dungeons, mazes, and castles. He has a girlfriend, LadyBacc, and his most prized possession of all—a diamond axe called Betty.
One day, Bacca is approached by a mysterious dragon . . . made entirely of diamonds! The dragon is from a new biome—a secret land few have ever seen—where a special object has been stolen. A seemingly impossible set of riddles and challenges stands in the way of getting it back, but if Bacca can help, the dragon promises he'll receive a new weapon even better than Betty. Is he willing to risk everything and push his crafting skills to their very limits? As his millions of YouTube fans already know . . . of course he is! He's Bacca!
JeromeASF debuts his Bacca character in book form with this Minecraft adventure for all ages. Bacca and the Riddle of the Diamond Dragon showcases the YouTube Minecraft star fans around the world have come to love: funny, creative, and just a little bit crazy!