The Theory That Would Not Die 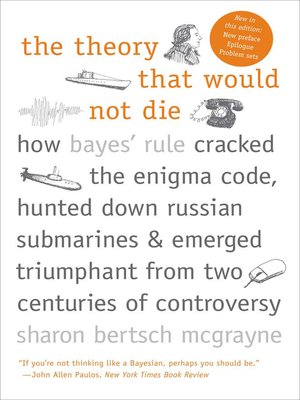 "This account of how a once reviled theory, Baye's rule, came to underpin modern life is both approachable and engrossing" (Sunday Times).

A New York Times Book Review Editors' Choice
Bayes' rule appears to be a straightforward, one-line theorem: by updating our initial beliefs with objective new information, we get a new and improved belief. To its adherents, it is an elegant statement about learning from experience. To its opponents, it is subjectivity run amok. In the first-ever account of Bayes' rule for general readers, Sharon Bertsch McGrayne explores this controversial theorem and the generations-long human drama surrounding it.

McGrayne also explains how the advent of computer technology in the 1980s proved to be a game-changer. Today, Bayes' rule is used everywhere from DNA de-coding to Homeland Security. Drawing on primary source material and interviews with statisticians and other scientists, The Theory That Would Not Die is the riveting account of how a seemingly simple theorem ignited one of the greatest controversies of all time.