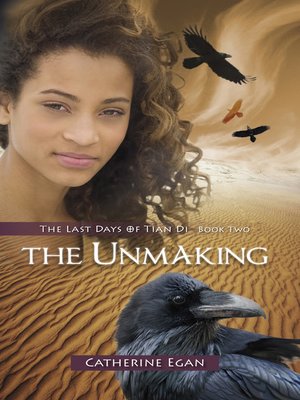 The Last Days of Tian Di

Eliza, now fourteen, has been studying magic and gaining a reputation for her power. She has much yet to learn – although she understands things like the ancient magic by which thing sare made and unmade, she cannot yet effect it herself. She is strong-headed and independent as ever, chafing at the boundaries the Mancers have set for her. Ravens continue to gather around Eliza and the Citadel, and nobody is sure if they are Eliza's guides or a trick sent by the evil Xia sorceress Nia. The Mancers create magic daily to keep Nia in her prison, but she escapes, turning them all to stone except Eliza's grandfather, Kyreth, the head Mancer. Why on earth would she do that? Nia also summons Ancient Magic to create a horrid Kwellrahg, with which to threaten Eliza's mother.

Eliza, her friends Nell and Charlie, the witch Swarn and the Faerie Lord Jalo must somehow stop Nia from wreaking further destruction. The key to victory is Eliza's mastery of the Ancient Magic herself. Can she make it work in time? Will they learn the true story of Elizaand Nia's common heritage?

Catherine Egan has fashioned another thrilling fantasy tale of magic, of good battling evil, of a young woman discovering her true nature and realizing her own powers.

The Last Days of Tian Di