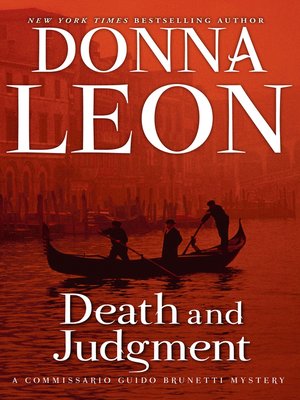 In Death and Judgment, a truck crashes and spills its dangerous cargo on a treacherous road in the Italian Dolomite mountains. Meanwhile, in Santa Lucia, a prominent international lawyer is found dead aboard an intercity train. Suspecting a connection between the two tragedies, Brunetti digs deep for an answer, stumbling upon a seedy Venetian bar that holds the key to a crime network that reaches far beyond the laguna. But it will take another violent death in Venice before Brunetti and his colleagues begin to understand what is really going on.

"No one is more graceful and accomplished than Leon." —The Washington Post

"The sophisticated but still moral Brunetti, with his love of food and his loving family, proves a worthy custodian of timeless values and verities." —The Wall Street Journal

"[Brunetti's] humane police work is disarming, and his ambles through the city are a delight." —The New York Times Book Review

"The heady atmosphere of Venice and a galaxy of fully realized characters enrich this intriguing and finally horrifying tale." —Publishers Weekly

"The first of Leon's books to knit together all her strengths: endearing detective, jaundiced social pathology, and a paranoid eye for plotting on a grand scale." —Kirkus Reviews