The Bible in History

ebook ∣ How the Texts Have Shaped the Times 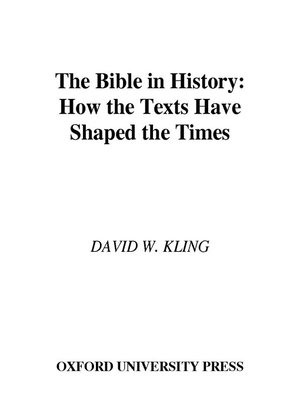 No one can doubt that the Bible has exerted a tremendous influence on Western civilization since the dawn of Christianity. But few of us have considered the precise nature of that influence in particular historical contexts. In this book, David Kling traces the fascinating story of howspecific biblical texts have at different times emerged to be the inspiration of movements that have changed the course of history. By examining eight such pivotal texts, Kling elucidates the ways in which sacred texts continue to shape our lives as well as our history. Among the passages hediscusses are: * "Upon this rock I will build my church" (Matthew 16:18), which inspired the formation of the papacy and has served as its foundation for centuries * "The righteous will live by faith" (Romans 1:17), which caught the imagination of Martin Luther and sparked the Protestant Reformation...*