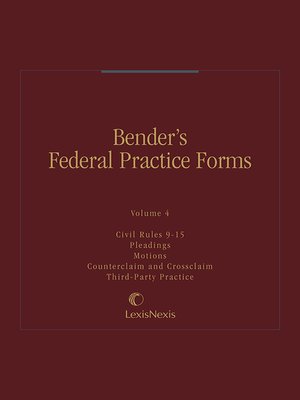 Bender's Federal Practice Forms provides the most comprehensive set of forms available on the market and is a practical companion to the venerable Moore's Federal Practice. All of the civil and criminal forms are up-to-date, including compliance with all recent amendments to controlling procedural rules, and comply with the general standards of practice in federal courts.

This set provides a complete range of the litigation forms you need for federal practice at any level, from U.S. District Courts all the way up to and including the Supreme Court of the United States. Forms are conveniently organized into chapters and volumes based on the controlling procedural rules, and all 20 volumes are now available in convenient eBook format.