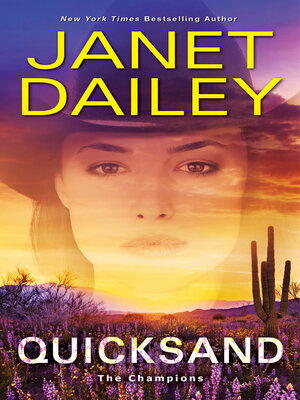 View more libraries...
New York Times bestselling author Janet Dailey's latest Champions novel tells the rugged, romantic story of an Arizona family ranch in trouble, and two stubborn rivals turned partners—in business and love.
Tess Champion knows better than to trust Brock Tolman, the rancher who once swindled her late father in a land deal. But with the Alamo Canyon Ranch in foreclosure, Tess is forced to accept Brock's offer of a partnership. Brock claims he only wants to breed the Champion bloodline into his herd. In exchange, he offers Tess one of his own young bulls. Soon enough, Quicksand is the rising star of the rodeo circuit, which only proves Tess is better at picking bulls than she is men. Because she's way too tempted to surrender to her attraction to Brock, despite her fear that he's involved in the accidents besetting both ranches . . .

It's not until a murder, an explosion and a plane crash in the wilderness strand them together that the truth of their relationship will come out. The Champion family's future is on the line, but it's Tess who will take the hit if she's fallen for the wrong man . . .