ebook ∣ LSD, Satanic Panic, and the Imposter Behind the World's Most Notorious Diaries 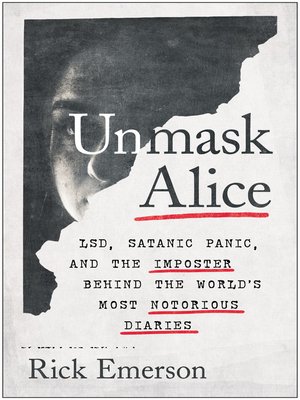 View more libraries...
"Unmask Alice by Rick Emerson goes a long way to showing what investigative journalism could be in the right hands . . . this book is undeniably buzzworthy." —Portland Book Review


"An absorbing and unnerving read . . . this book demands to be finished in one sitting." —Booklist

But Alice was only the beginning.

In 1979, another diary rattled the culture, setting the stage for a national meltdown. The posthumous memoir of an alleged teenage Satanist, Jay's Journal merged with a frightening new crisis—adolescent suicide—to create a literal witch hunt, shattering countless lives and poisoning whole communities.

In reality, Go Ask Alice and Jay's Journal came from the same dark place: Beatrice Sparks, a serial con artist who betrayed a grieving family, stole a dead boy's memory, and lied her way to the National Book Awards.

Unmask Alice: LSD, Satanic Panic, and the Imposter Behind the World's Most Notorious Diaries is a true story of contagious deception. It stretches from Hollywood to Quantico, and passes through a tiny patch of Utah nicknamed "the fraud capital of America." It's the story of a doomed romance and a vengeful celebrity. Of a lazy press and a public mob. Of two suicidal teenagers, and their exploitation by a literary vampire.

Unmask Alice . . . where truth is stranger than nonfiction.