Prince of Fire / The Messenger / The Secret Servant / Moscow Rules 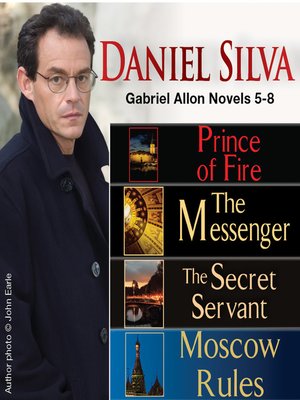 View more libraries...
Novels five through eight of the Gabriel Allon series from #1 New York Times bestselling author Daniel Silva.
Prince of Fire
Gabriel Allon is back in Venice, when a terrible explosion in Rome leads to a disturbing personal revelation: the existence of a dossier in terrorist hands that strips away his secrets and lays bare his history…

The Messenger
Gabriel Allon is about to face the greatest challenge of his life. An al-Qaeda suspect is killed in London, and photographs are found on his computer—photographs that lead Israeli intelligence to suspect that al-Qaeda is planning an attack aimed straight at the heart of the Vatican.
The Secret Servant

A terrorist plot in London leads Israeli spy Gabriel Allon on a desperate search for a kidnapped woman, in a race against time that will compromise Allon’s own conscience—and life...

The death of a journalist leads Israeli spy Gabriel Allon to Russia, where he finds that, in terms of spycraft, even he has something to learn if he wants to prevent a former KGB colonel from delivering Russia's most sophisticated weapons to al-Qaeda.