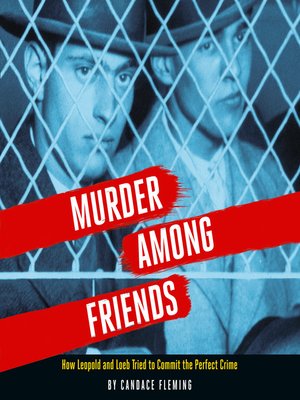 View more libraries...
How did two teenagers brutally murder an innocent child...and why? And how did their brilliant lawyer save them from the death penalty in 1920s Chicago? Written by a prolific master of narrative nonfiction, this is a compulsively readable true-crime story based on an event dubbed the "crime of the century."
In 1924, eighteen-year-old college students Nathan Leopold and Richard Loeb made a decision: they would commit the perfect crime by kidnapping and murdering a child they both knew. But they made one crucial error: as they were disposing of the body of young Bobby Franks, whom they had bludgeoned to death, Nathan's eyeglasses fell from his jacket pocket.
Multi-award-winning author Candace Fleming depicts every twist and turn of this harrowing case—how two wealthy, brilliant young men planned and committed what became known as the crime of the century, how they were caught, why they confessed, and how the renowned criminal defense attorney Clarence Darrow enabled them to avoid the death penalty.
Following on the success of such books as The Rise and Fall of Charles Lindbergh and The Family Romanov, this acclaimed nonfiction writer brings to heart-stopping life one of the most notorious crimes in our country's history.