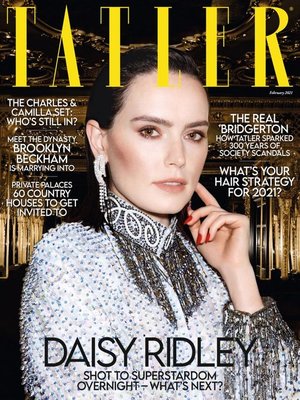 Tatler is mischievous, glamorous, intelligent and fun, providing an insider’s view of what is really happening in British society with a compelling mix of fashion, the arts, politics, people, parties and glamour.

The BYSTANDER Everything about everybody everywhere

• Prince Charles and Camilla surround themselves with a tight-knit social circle. But who are the cream of the Cornwalls’ clique?

Diary of a Gen-Z prohibition partygoer

• It was the 1920s throwback nobody expected – the return of the prohibition party scene. A mystery guest reports on the social set’s new speakeasies

• Lockdown’s not so bad with a pedigree chum. Though they do say owners start to resemble their dogs. Can you tell?

• After the annus horribilis of 2020, Sabine Getty is inspired by the belle époque as she imagines the party to make up for all parties

From bad to verse

• After her father’s murder, Arch Hades fled St Petersburg for England. Boarding school, a young marriage and divorce have all given her ample material to lead Britain’s new wave of ‘Instapoets’

• With a shared love for the elegant anemone, Perrier-Jouët has teamed up with McQueens Flowers for an unforgettably romantic Valentine’s Day

CHANGING OF THE GARDEN

• Lording from home can be a chore when the peer-topeer network goes down. Patrick Kidd exposes dodgy connections in the smart end of Parliament

One in a Mil

• With Grace Kelly as a godmother and Frank Sinatra as a childhood friend, life was already extraordinary. Then came a diagnosis of terminal cancer. How am I coping? I’m doing it my way

• Fashion trends fit for a princess – both on and off duty

• Chandler Tregaskes shines a spotlight on Northamptonshire, the county that was well-heeled long before the days of Diana

WRITTEN IN THE STARS

• SHE MAY BE ‘INTIMIDATING’, BUT DAISY RIDLEY DIDN’T BECOME A JEDI BY BEING A WALLFLOWER. ON A MISSION TO A GALAXY NOT SO VERY FAR AWAY (HAMPSTEAD HEATH), THE ACTRESS TALKS TO TOM LAMONT ABOUT COMING BACK DOWN TO EARTH

• They’re the estates where the silver shines, the shooting is second to none and the guest list is as glittering as the family jewels. Tatler presents its pick of the best country houses in the land – how many have you spent the weekend in?

The lady is a punk

Our man in Westminster

• Tea at Highgrove, tennis with Boris and his own luxury concierge business – Ben Elliot had the kind of lifestyle even his super-rich clients envied. But in taking on a tough role in government, has he kissed all that goodbye?

• WHEN BROOKLYN BECKHAM PROPOSED TO ACTRESS AND HEIRESS NICOLA PELTZ LAST YEAR, THE SPOTLIGHT TURNED ON HER FABULOUSLY RICH AND NOTORIOUSLY PRIVATE FAMILY. BUT JUST WHAT KIND OF DYNASTY IS THE GROOM-TO-BE MARRYING INTO? BY BEN WIDDICOMBE

• Once reviled as the ultimate hair-don’t, a style best left in the Eighties, the mullet is back – and the cut of choice for 2021. Chop,...