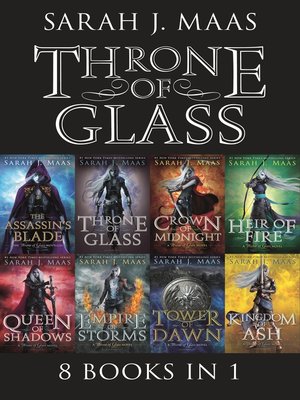 View more libraries...
One of the best fantasy book series of the past decade - Time Magazine
When magic has gone from the world and a vicious king rules from his throne of glass, an assassin comes to the castle. She is a prisoner, but if she can defeat twenty-three killers, thieves, and warriors in a competition to find the greatest assassin in the land, she will become the king's champion and earn her freedom. But the evil she encounters in the castle goes deep, and as dark forces gather on the horizon – forces which threaten to destroy her entire world – the assassin must take her place in a fight greater than she could ever have imagined.
This is the epic, heart-stopping fantasy series that has turned #1 New York Times bestselling author Sarah J. Maas into a worldwide phenomenon. Fans new and old will dive into this ebook bundle containing the whole series: Throne of Glass, Crown of Midnight, Heir of Fire, Queen of Shadows, Empire of Storms, Tower of Dawn, the thrilling finale Kingdom of Ash, and the companion anthology The Assassin's Blade.