The Song of God 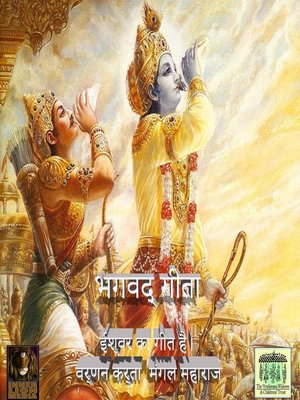 The Gita is set in a narrative framework of a dialogue between Pandava prince Arjuna and his guide and charioteer Krishna. At the start of the Dharma Yudha (righteous war) between Pandavas and Kauravas, Arjuna is filled with great moral dilemma and despair about the violence and death the war will cause in the battle against his own kin. He wonders if he should renounce and seeks Krishna's counsel, whose answers and discourse constitute the Bhagavad Gita. Krishna counsels Arjuna to "fulfill his Kshatriya (warrior) duty to uphold the Dharma" through "selfless action". The Krishna–Arjuna dialogues cover a broad range of spiritual topics, touching upon ethical dilemmas and philosophical issues that go far beyond the war Arjuna faces. Numerous commentaries have been written on the Bhagavad Gita with widely differing views on the essentials. According to some, Bhagavad Gita is written by Lord Ganesha which was told to him by Vyasa. Vedanta commentators read varying relations between Self and Brahman in the text: Advaita Vedanta sees the non-dualism of Atman (soul) and Brahman (universal soul) as its essence, Whereas Bhedabheda and Vishishtadvaita see Atman and Brahman as both different and non-different, while Dvaita Vedanta sees dualism of Atman (soul) and Brahman as its essence. The setting of the Gita in a great battlefield. The Bhagavad Gita presents a synthesis of Hindu ideas about dharma, theistic bhakti, and the yogic ideals of moksha. The text covers jnana, bhakti, karma, and Raja Yoga. The Bhagavad Gita is the best known and most famous of Hindu texts, with a unique pan-Hindu influence. The Gita's call for selfless action inspired many leaders of the Indian independence movement including Mahatma Gandhi; the latter whom referred to it as his "spiritual dictionary".