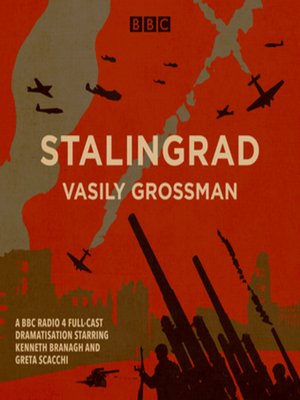 A two-part radio dramatisation of Vasily Grossman's dark, honest account of the battle of Stalingrad; a prequel to Life and Fate – plus Stalingrad: Destiny of a Novel
Epic BBC serial Life and Fate stunned radio audiences in 2011, garnering rave reviews for its powerful depiction of a family torn apart by war in Soviet Russia. Now, with this astonishing prequel published in its first ever English translation by Richard and Elizabeth Chandler, we are transported back to the very beginning of Vasily Grossman's panoramic tale, as the 'harsh whirlwind' of war approaches the city of Stalingrad.
As Stalingrad opens, we are introduced to the many lives of the Shaposhnikov family and their partners. Atomic scientist Viktor Shtrum struggles with his work for the State and with his own conscience, while his family live, love and work (despite swirling rumours) to run the city's power stations, factories and hospitals.
Meanwhile, at the Front, we meet old-school Bolshevik Commissar Nikolai Krymov in the thick of the Russian army's pell-mell retreat before Operation Barbarossa, and follow the 'unknown' soldiers giving their lives to hold the line at the Volga.
This vivid, gripping drama features many of the same acclaimed cast as Life and Fate, including Kenneth Branagh as Viktor Shtrum and Greta Scacchi as Lyuda Shaposhnikova.
Accompanying this stellar dramatisation is Stalingrad: Destiny Of A Novel; featuring extracts from Grossman's private journal, translated here for the first time, and chronicling Stalingrad's tortuous gestation and long, tormented passage to print. Written and presented by author and historian Catherine Merridale, with readings by Anton Lesser, this five-part series reveals the dramatic backstory behind the classic novel and explores the beginnings of Grossman's own journey towards Soviet heresy.
Written by Vasily Grossman
Translated by Robert and Elizabeth Chandler
Dramatised by Mike Walker (Part One) and Jonathan Myerson (Part Two)
Part One produced and directed by Jonquil Panting
Part Two produced by James Robinson and directed by Jonathan Myerson
Series Producer: Alison Hindell
Original music composed by John Hardy, with Rob Whitehead, and performed by Oliver Wilson-Dixon, Tom Jackson, Stacey Blythe and Max Pownall
First broadcast BBC Radio 4, 30 November-1 December 2019