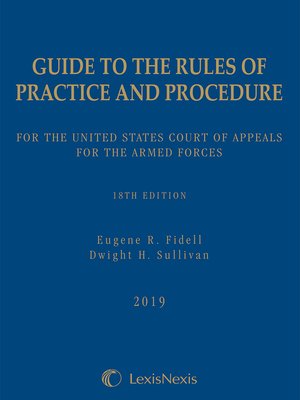 Interest in military justice remains surprisingly intense as a result of sustained legislative and media attention to military sexual assault issues, high-profile courts-martial, and the troubling revival of military commissions following the 9/11 attacks. While the spotlight understandably focuses initially on the trial courts, attention shifts to the appellate courts established under the Uniform Code of Military Justice ("UCMJ") and the Supreme Court of the United States as significant cases work their way through the system.

Given the enhanced interest in the military justice system, it is as critical as ever that the public, the bar, and Congress (which enacted significant military law reforms in 2013 and 2016) have available reliable information about the functioning of the military appellate judicial process. The pinnacle of that process, short of the Supreme Court, is the Court of Appeals for the Armed Forces.

Such are the goals of this GUIDE. Periodic revisions are contemplated in order to maintain its usefulness. Very little has been retained intact from the first edition and the 1980 Supplement. The effort throughout is to strike a balance between the practical needs of counsel and others who work with the rules, on the one hand, and, on the other, remaining alert to major themes and areas of potential improvement.