The Temptation of Grace 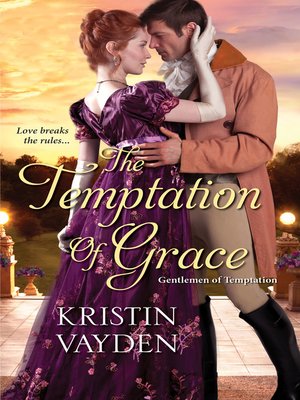 View more libraries...
The third book in acclaimed author Kristin Vayden's Regency historical series set in an elite gentleman's club, no place for a London debutante. But what happens at Temptation stays at Temptation . . . or does it?

Dogged by gossip and scandal, Ramsey Scott, Marquess of Sterling, is the last man who should stand guard over lovely Miss Grace Morgan, much less fall for her. When the innocent's first outings of the season land her in Temptation, the private club Ramsey manages, he longs to take her in his arms and keep her there, if only his past would allow it. Their friendship will have to suffice—but as Grace blooms in society, Ramsey feels her slipping from his grasp. Until she lures him into his greatest temptation yet . . .

She should never have come to his office unattended. But how else was Grace to get Ramsey's romantic attention? Yet now she is left waiting for a proposal that may never come—and wondering if Ramsey's vexing propriety will force her to marry another . . .

"This Regency romp is a well-balanced mix of heat and sweetness...Vayden's considerable promise will keep readers eager for sequels."
—PublishersWeekly on Falling from His Grace

"Vayden has penned a true standout."
—Booklist on Falling from His Grace